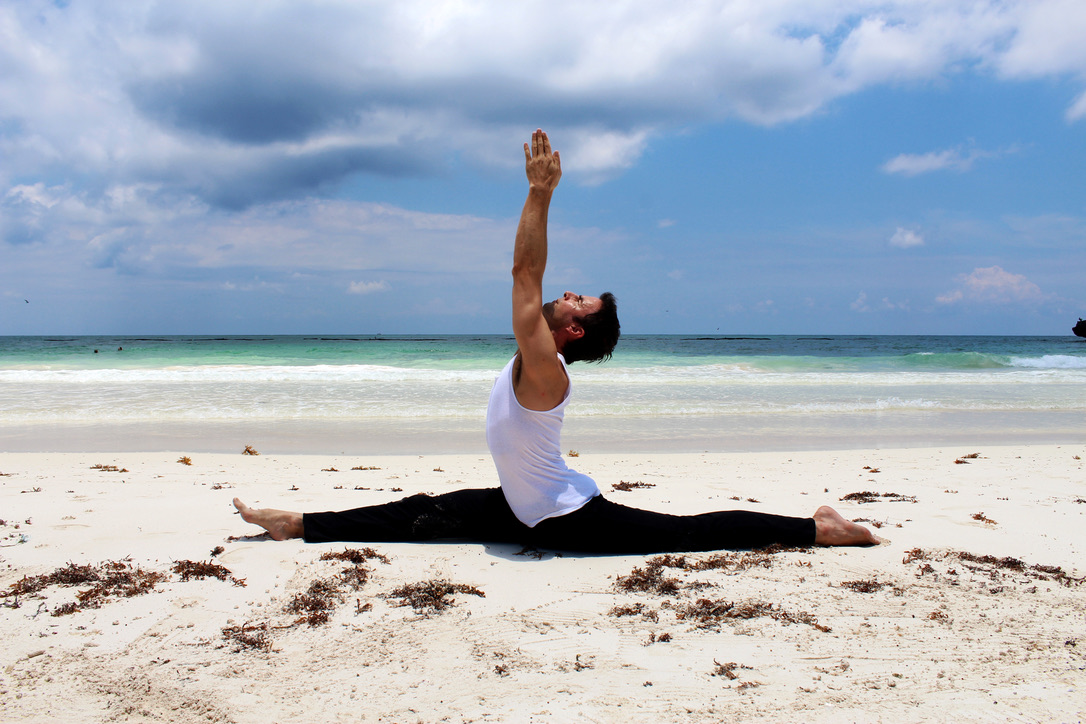 Picture ruggedly stunning Amorgos, the easternmost island of the Cyclades group, known for its cobalt waters, wild nature and blinding-white architecture, its “special energy” and the memorable movie set of Luc Besson’s ‘The Big Blue’. Then add to that a sprawling, elegant, family-run hotel standing on the hillside of sparkling Aegiali Gulf, with a spa called Lalon Idor and a restaurant called Ambrosia and terraces facing the sea. And finally sprinkle that with some of the world’s best, most experienced and scintillating yoga teachers, musicians, holistic practitioners, organisers and participants coming from near and far in pilgrimage-mode and you have the annual Elysia Yoga Convention. Entering its third year as of March 28th and until April 4th, this remains the only event of its kind in Greece.

“Elysia is an event created from the soul,” says Mat Turner, who dreamed up the idea of Elysia several years ago while working at Aegialis Hotel & Spa as a Concierge, after leaving his professional career and life in the UK behind. Turner’s passion and devotion to yoga is undoubtedly immovable, as he says it literally saved his life after he suffered from depression for over 25 years before discovering how yoga could transform him. With so many yoga teachers heading to Aegialis Hotel & Spa, it was only a matter of time until he began to practice yoga himself and discover its innumerable health benefits.

The hotel’s co-owner, Irene Iannakopoulos, returned to Amorgos with her husband after a decade in the US, at a time when Aegialis had no electricity, healthcare facilities, shops or telephone connection; a time when reaching Amorgos took 36 hours by boat. Nonetheless, both natives of the island, they dedicated themselves to build their holistically-oriented hotel there.

Today Aegialis Hotel & Spa is known as one of Greece’s most splendid and relaxing wellness destinations and has received the Green Leaders Badge on TripAdvisor for its eco-friendly approach and organic-only policy. The award-winning “Ambrosia Gallery” restaurant serves a plentiful breakfast buffet, specialising in flavoursome traditional Greek and island cuisine, which is rich in local herbs and spices. They also offer a great choice of vegetarian and vegan options and cater to specific dietary preferences.

Another added bonus is the hotel’s impressive Lalon Idor Spa facilities, with a hammam, sauna, Jacuzzi and beautiful indoor salt-water pool (with a flow stream and water cannon), picturesquely surrounded by traditional Cycladic, tiled arches. The spa, which makes the hotel even more visitable throughout the year, has gained a top reputation for its team of skilled and qualified beauty and massage therapists and lavish treatment menu.

“We’ve been hosting yoga retreats since 2011; yoga and wellness are part of our ethos at Aegialis Hotel & Spa philosophy and we’re always coming up with fresh ideas emphasise on this,” says Iannakopoulos. “We have six beautiful yoga shalas and an outdoor rooftop available, all which come with yoga props and magnificent sea views. Yogis from all over the world love to come here for their retreats because it’s the perfect destination for wellness, tranquillity and luxury at once.”

In just a few years, the Elysia Yoga Convention has made Aegialis a key destination for yoga fans because of its very special teachers, programming and ambience at once. “Elysia is not about making money,” Turner says, “it’s not an event that squeezes hundreds of people into a sports hall. Elysia is about creating a community and a beautiful family rapport that exists before, during and after the event.”

When I ask Turner how Elysia has ‘evolved’ since it started off two years ago, he says: “This year’s schedule is fantastic,” he adds, “with fewer classes and more free time for explorations and rest, but still so much choice. Classes won’t overlap so participants won’t have to decide between one and another experience.

All the teachers flying to Greece from around the world to teach at Elysia are very skilled, charismatic and special. As of today we will start featuring just a handful of the great range of teachers who will be presenting there to offer a deeper look into their own practice and their reasons for coming to Greece. We start with Garth Hewitt, who is returning to Amorgos at the end of March to present his Shiva Power classes.

Your life’s motto?  Breathe into every moment.

In a nutshell, please describe who you are & what you will  be offering @ Elysia 2019? Why Elysia?  I came to Amorgos and to Aegialis Hotel and Spa to lead a yoga retreat in 2015.  Mat and Irene invited me to present at the first Elysia Yoga Convention 2 yrs ago.  It was such a special experience.  I wasn’t able to attend last year due to an illness in my family but I’m so excited to be coming back this year.  I’ll be presenting one of my signature Shiva Power® classes.  This is a vinyasa based flow class that emphasizes concentration and going into the fire.  All of my classes focus on the bigger picture of yoga — quieting the mind and experiencing the true nature of the Self.  There will be something for everyone in this practice.  Some intense long holds, playful arm balances and inversions, deep backbends and forward folds and some meditation after a long relaxing shavasana.

Is it your first year?  No. This will be my second year and my 3rd time visiting the Aegialis Hotel & Spa.

How would you describe the Elysia Concept?  I think this experience is more like a retreat than a convention. I love how intimate and personal it is because there isn’t 1000 people attending. It feels like a big retreat, led by teachers from all over the world, who each have brought a few of their students with them. The first convention was an amazing experience! I absolutely loved it!

What makes it a notable event globally?  I think this convention is very special because it is so small and intimate and it brings together such an interesting mix of teachers from all over the world.  Amorgos is also a very special island. I feel like I have journeyed back in time when I come to the island.  It doesn’t feel at all like it has changed in the last 50-100 yrs. It doesn’t feel overly crowded or feel like a tourist destination. I think the island is very peaceful.

What personally inspires you most about being present there?  Connecting with the people and just being on the island are very inspiring. I teach all over the world right now and I love how universal the practice of yoga is no matter where you are or who you are.  It’s always wonderful to see the practices working. That’s powerful. Yoga is for everyone.

What are your greatest aspirations for the Elysia Yoga Convention this year & overall?  I think this will be another great year.  I hope there are a lot of new students who come and can experience this amazing convention and take back a little piece of the island with them when they return home.  I’m looking forward to practicing with the other presenters. Seeing what everyone is sharing and how their practices have grown and shifted in the last 2 yrs.  I love the community and I’m looking forward to connecting with everyone again.  My aspirations are simply to continue what I’m doing now. Sharing the teachings of my teachers with as many people as possible and with anyone who is looking for growth, transformation, and getting deeper in touch with their Self.

I think yoga has the power to change the world and touch so many people.  Everyone is affected who comes into contact with the one person in their circle who practices yoga — who is better able to concentrate, who is more kind and compassionate, and who is more present and open.  Let’s spread yoga as far and as wide as we can.

Tell us something we didn’t know! 😉  My roots are in Canada.  I’m a Canadian and American citizen.  I’m based in LA these days but I grew up in Canada and a lot of my family is still in the Toronto area.  My first yoga class was in Toronto about 17 yrs ago.  I thought it was one of the hardest things I’d ever done in my life and I found it fascinating.  I was pretty much hooked from the first ever class.

Alexia Amvrazi is a passionate wellness writer, copywriter & broadcaster based in Athens, Greece. Check out www.alexiaamvrazi.com